An Admiration of Crows

An Admiration of Crows.

I have been in the teaching profession for almost thirty years and during that time have seen huge changes and developments in school life.

One thing however, that remains constant for me amid all the change, is the fascination I have with the schoolyard crows. Over the years I have taken delight in and developed a fondness for these raucous rabble rousers, probably the most unwelcome visitor to any garden.

I love their beady, intelligent eyes, their quizzical expressions and their defiant swagger. I love the way they appear to understand that they are not beautiful like finches, appealing like the robin or sweet throated like the blackbird but just don’t care. I love that their name in Irish – préachán – describes so well their harsh, strident call. I love the way in summertime they are blacker than their shadows.

I wonder at their haphazard, slapdash, carelessly constructed nests perched precariously on the highest, most windblown branches which weather the severest storms and never fall down. This pleases me, because it confirms my belief that things don’t have to look perfect to be perfectly serviceable. We can all learn from this.

I admire their gusty, full on approach to life and their dogged determination and perseverance. They are opportunists of the highest order and completely shameless. Anyone who has ever watched a crow struggle to get the last crisp or kernel of popcorn out of the scrunched-up bag will know what I mean.

I feel a sense of kinship with these birds as like myself they are enslaved by the bell. Every morning they are summoned for “little-lunch” and again in the afternoon for dinner. Years of observation have led me to conclude that this is not a purely pavlovian response to the sound, I am convinced they can tell the time – they don’t appear when we ring the bell at 9.20 a.m. as they have worked out that there’s are no goodies available. They also have the 5 day week sussed and won’t come at any time on a Saturday. I’ve checked.

Crows have worked their way into our everyday language, to “eat crow” means to be humbled and Shakespeare refers to them in many of his plays, he does not appear to have been enamoured of them and calls them “night’s black agents.”

I remember once being approached on my way into school by a very irate granny announcing “I have a crow to pluck with you.” The conversation went rapidly downhill after that opening!

The collective term for a group of these unpopular birds is a “murder of crows,” this makes it very clear what most people think of them.

Henry Ward Beecher (an American Clergyman) thought differently, he said: “If men had wings and bore black feathers few of them would be clever enough to be crows.” I second that! 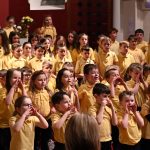